From Coney Island to the Brooklyn Bridge

Started: 9:30 am on Coney Island Beach where Stillwell Avenue meets the Atlantic

Finished: 4:30 pm at the foot of the Brooklyn Bridge

Last summer I walked through Manhattan. It was a great experience. So much so, that I wanted to plan more walks. So this summer I decided to do Brooklyn. After a couple delays, the date was set for August 9th, which was exactly one year to the day after last years walk.

Last year, I was completely unprepared for the 15 mile hike and I had a bunch of painful chafing and lost two toenails along the way. This time I was prepared! I had a pair of shorts that had spandex underwear built into them, and I had new shoes that actually fit my feet. That was a good start. The other thing I had this time was a companion. Thanassis decide to come with me, which was great. It made the walk (and in particular the repetitive suburb bits) much more enjoyable. Thanassis had a good pair of shoes, but unfortunately no spandex in his shorts :-) We will get to that shortly.

The night before, Thanassis and I made a rough route and a list of things we wanted to see and do. I am happy to say we got through basically all of it. If you are not interested in reading the journal entry, here are the quick links of interest:
The Route Taken

A Google Map with the exact route of the walk marked in blue.


We set the alarm for 7am (again!) and were on our way out by about 8:00. We stopped by a Starbucks to get iced coffee and jumped aboard the 4 train down to Union Square, where we transferred to the Q train for the 1h plus ride out to coney island (photo of train below). 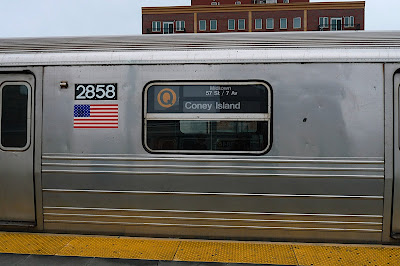 
We arrived in Coney Island at about 9:30, after a long and pleasant ride where Thanassis made me aware of the cult NYC movie The Warriors, which is now on my Netflix queue. We walked down to the beach, took a deep breath (and a pee) and then started the long walk towards the East River. Photos below are Coney Island from the subway (including the the cyclone), the boardwalk, and the many other fun activities available. 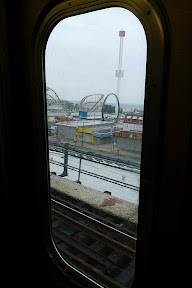 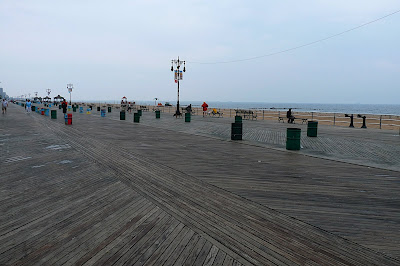 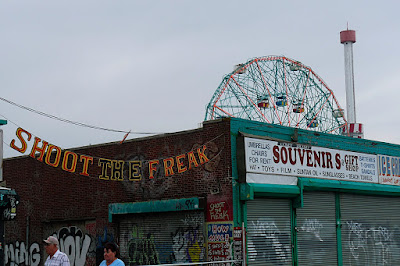 
We started the walk at the end of Stillwell Avenue and the plan was to walk up it until its end at Bay Parkway. The first stop was Nathan's, which I guess is really part of Coney Island, but I decided to put it in separate entry of the journal, since it is something we did on the actual walk. We grabbed a quick hot dog (it was open, and there were other people there at 9:30am) and continued. Not much on this part of the walk, but we did see a cool mural. 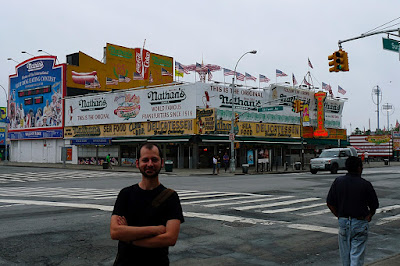 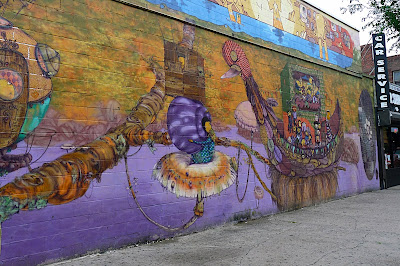 
At the end of Stillwell we began the long walk through the bulk of Brooklyn, which is really very suburban. This part of the walk lasted about a little over an hour and took us through New Utrecht and Borough Park, the later being the largest orthodox jewish neighbourhood I have ever seen. This part of Brooklyn is mainly just detached two and three story houses. Not many photos taken here, but we did see one coffee shop with an enticing name. 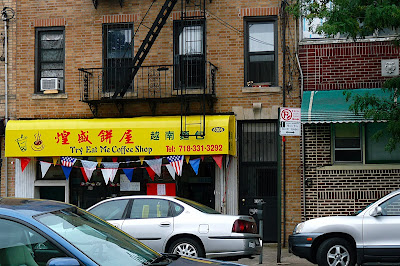 
When we got to Sunset Park things started to look like the typical image of Brooklyn: blocks of 4 story brownstone buildings with a ton of trees. Sunset Park looked nice, but we didn't stop since we wanted to get to Greenwood cemetery. Just north-west of Sunset Park is a very happening Mexican area with lots of restaurants and about a million wedding cake shops. Below are photos of the street directly north of the park, a simple and elegant wedding cake (wtf?), and Fifth Avenue where all the Mexican restaurants were. 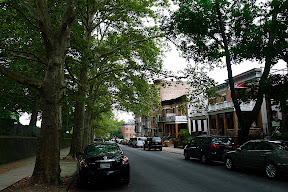 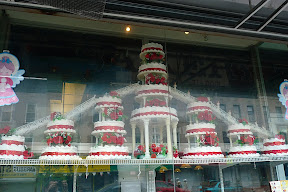 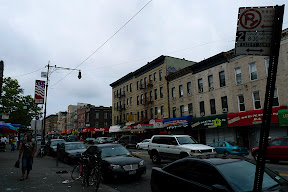 
Greenwood Cemetery was built in 1838 and was the first rural cemetery in New York. It was also our first real destination since we left Coney Island. Our Greenwood experience began with a quick trip to the mens room, where Thanasis changed shorts due to increased chafing. After that, we set out to lazily make our way through the cemetery with three stops in mind: Sammuel Morse, Boss Tweed and Jean-Michel Basquait. Greenwood was exceedingly beautiful, and I had always wanted to see it ever since I read a history of New York and I learned it was Boss Tweed's resting place. Along the walk we also saw the Steinway's mausoleum. At the time I figured this had something to do with the Steinway area of Queens, but only after seeing a PBS special did I learn about their famous pianos as well. Below are photos of Morse's grave, me with the Boss, Thanassis with Jean-Michel, and one of Thanassis posing thoughtfully. 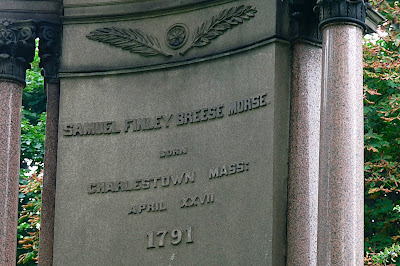 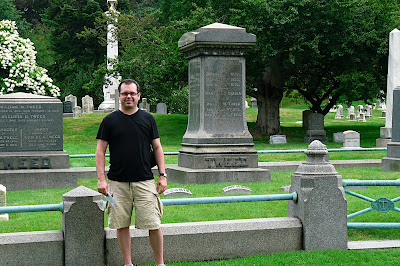 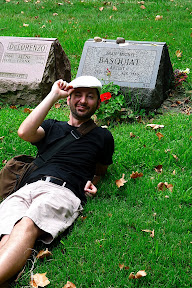 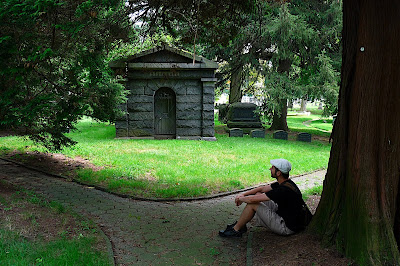 Lunch at the Park, plus a Pharmacy


After Greenwood we grabbed a couple sandwiches at a deli and hit Prospect Park. We sat for about 45 minutes enjoying the park, our lunch and the good weather. At this point we were at the south west point of the park. The plan was to walk through the park up to Grand Army Plaza. Unfortunately, at this point Thanassis' chafing had become unbearable (for him, for me it was kind of funny). So we exited the park and using my trusty Android phone found a pharmacy to pick up some petroleum jelly and relief for Thanassis. 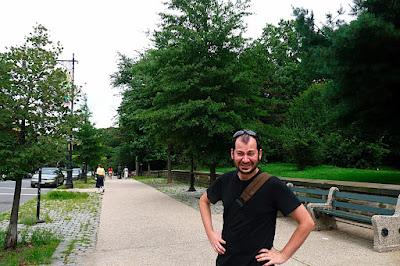 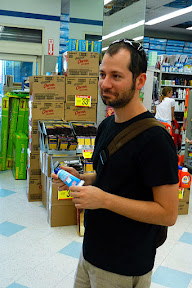 
At this point we were a little off route, but in Park Slope, which is a really beautiful part of Brooklyn. Actually, it really reminds me of Philly since it basically chock-a-block 4-5 story brownstones with tons of trees and great mom-and-pop stores and restaurants. We stopped by a Starbucks to grab a drink and let Thanassis apply his newly purchased product to his nether regions. We then walked up 7th Avenue past all the activity and an open air market. 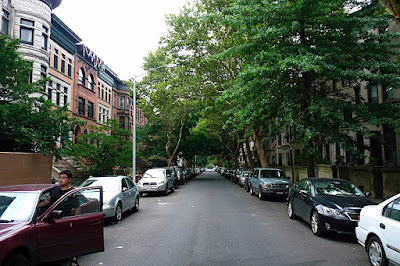 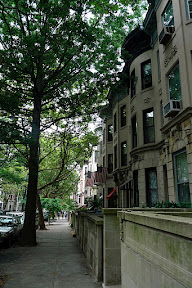 
We took 7th all the way to Flatbush. The goal at this point was to walk as fast as we could through downtown Brooklyn and then onto Brooklyn Heights. I wasn't expecting much from this part of the walk, since my past impressions of Flatbush and Atlantic Avenue were not great. The highway like streets and huge shopping centers left it with little charm. However, after passing the Williamsburgh Savings Bank Tower, we got onto a really nice stretch of Atlantic Avenue that had a ton of restaurants and antique stores. Unfortunately, we were getting tired, so I forgot to bust out the camera and snap photos. But, thanks to Street View, that is less of a problem! 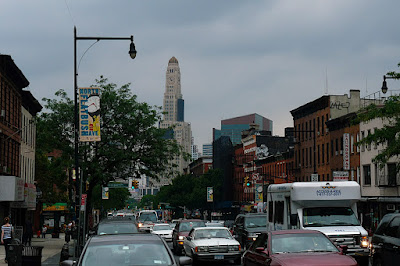 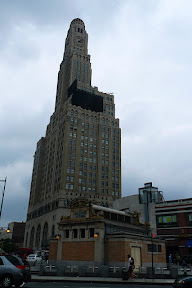 
Next stop was Borough Hall, which was the City Hall of the former City of Brooklyn. As we looked north-east we could see the Manhattan Bridge and the Empire State Building -- our first signs that we were nearing the end of our walk. 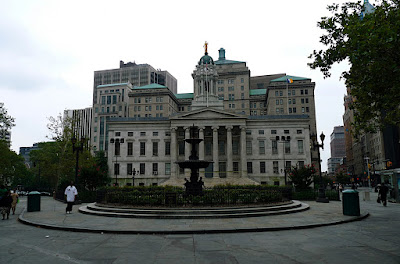 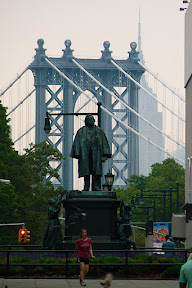 
We hit the East River! Brooklyn Heights is a really nice residential neighbourhood that has a great pedestrian park overlooking Manhattan. We could now see Manhattan and were almost finished. We sat and took in the view for about 20 minutes and then made our way to our final stop, which was only about 15 minutes down the road. 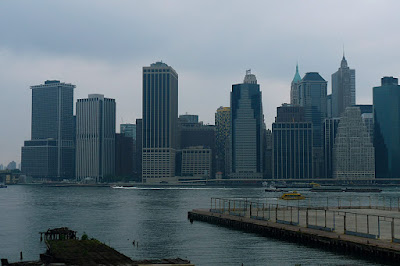 
We made it! Roughly seven hours after we started in Coney Island, and eight hours after leaving the house we had reached our final destination -- the Brooklyn Bridge. We snapped some photos and relished our accomplishment and then set off for the nearest subway stop. 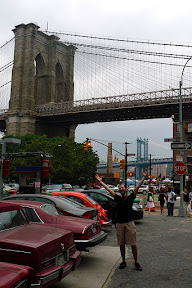 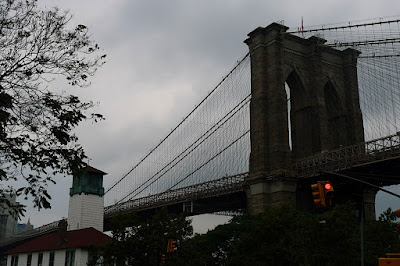 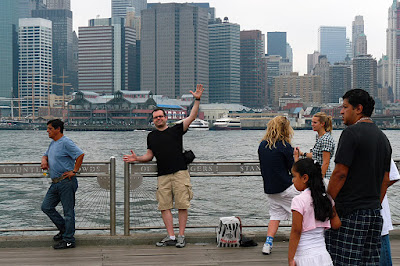 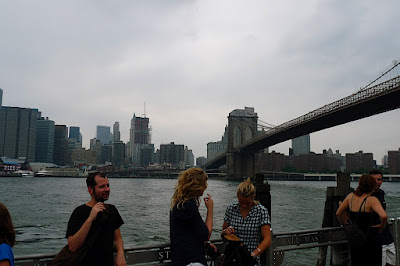 
We took the train back the upper east side. Thanassis had to grab a bus back to the Bronx and had 30 minutes to kill, so we decided to celebrate with a beer at Molly's. I then went home and promptly took a nap. 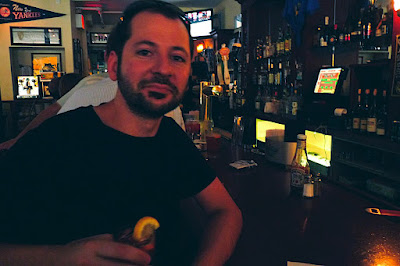